Male & Female Created He Them 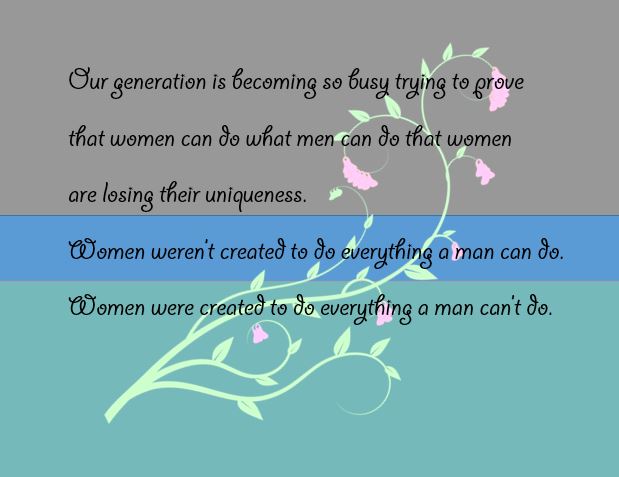 I was listening to some messages online from a church gathering where they had several ministers preaching. I noticed several of the ministers would mention how females were equally important to the men of the church. Just before anyone gets confused –  I agree, 100%.  Females, you are made in God’s image, just as a man is. Genesis 1:27 tells us  So God created man in his own image, in the image of God created he him; male and female created he them.   Then the ministers would often go on and starting talking about all the things that a woman should be allowed to do since they were equal to a man. Can I just say I’m sick of this junk?!? I’m not a man.  If technical terms disturb you, then you should probably skip a few lines. It’s pretty straight forward, I do not have a penis, (see technical term) therefore I am not a male. That makes me a female. Contrary to what the world states, there are only two options. There are not 36, 51, 71, 73 or any other number of options. There are only two: male and female. Wanna know where I get that? Yep, the Bible. God created male and female, two genders. If a man has certain responsibilities then so does a female. Certainly those responsibilities from time to time will overlap. I don’t for one second believe that they always will.

This is the book of the generations of Adam. In the day that God created man, in the likeness of God made he him;
male and female created he them; and blessed them, and called their name Adam, in the day when they were created.
Genesis 5:1-2

Men, you can’t grow a child inside of you nor can you breast feed. You see there are things that a man cannot do that a female can. God made us different, why are we fighting so hard to be ‘equal’. I was teaching Sunday School one week and this topic came up. One individual seemed pretty upset and bitter about things that, as a female, she couldn’t do at church. While I was trying to explain I used the following illustration. Let’s say that for the next month the pastor comes to church and preaches, the teachers come and teach, the sound techs are there on time and ready, and so on. It appears that each and every person is there on time and doing their job. What no one seemed to notice the first week is the person that normally cleans the church just didn’t that week.  For a full month the trash in the kitchen and bathrooms weren’t emptied, the diaper genie was full of dirty diapers, papers were lefts on pews, tissues were left on the altar, no one vacuumed, the coffee pot was never cleaned, there was no toilet paper in the bathrooms, no paper towels to be found, and so on. The person decided that cleaning the church wasn’t as important as some of the other jobs so they just stopped. They still went to church, but no longer did their job. After a month can you imagine the smell and the amount of bugs that would be in the church? This young lady in my class had been taught that if she wasn’t doing the same as a man her job wasn’t important. She is so very important and so are you! The person cleaning the church is just as important as the pastor or a deacon. We must all work together, but we must do our own individual jobs. If the church isn’t cleaned do you know what will happen? Besides the obvious of it getting dirty, people will not come. Be realistic, do you want to go to a church that smells and has bugs everywhere? Nope, I didn’t think so. When we stop doing what God has called us to do because we think someone else’s job is better we are hurting ourselves. The person that should have cleaned the church now sits in a dirty bug infested church and he has no one to blame but himself. Although it may not seem like an important job, God has placed each of us where He wants us. Females, we must learn to embrace our womanhood once again and stop trying to be what we deem as equal to a man. God settled that debate at creation, we are already equal in His eyes.