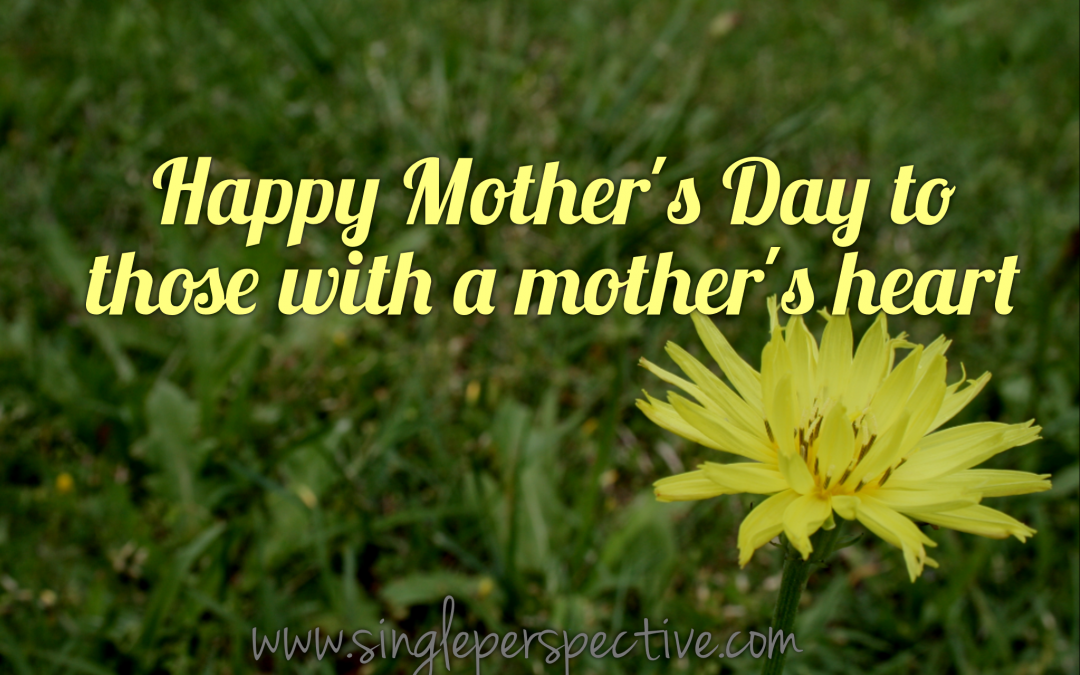 I sat at church today and did the same thing I’ve done numerous times throughout my life; I watched mothers of all ages go to the front of the building to be recognized for Mother’s Day. They’re given flowers, plaques, keychains, pictures, cups or some other token of appreciation. Today, as the mothers were making their way to the front I looked around and thought about a few other people. I thought about the widow that wanted a child but lost her husband before that was possible. I thought about the many women I knew that had miscarriages. The woman that had Christmas presents bought and wrapped for her adoptive child that never came because the adoption fell through. The women that are trying to conceive, but can’t. The woman that carried a child to term only to have a stillborn or the child die shortly after birth. The woman that had a child, but felt adoption was in the best interest of her child and never had the opportunity to watch her child grow. The woman that wanted a child so bad she could taste it, but her husband didn’t feel the same. The women whose child died in an accident and is no longer here to celebrate her.

Traditionally in churches on Mother’s Day we’ll hear a part of this passage in Romans 13:6-8: 6 For for this cause pay ye tribute also: for they are God’s ministers, attending continually upon this very thing. 7 Render therefore to all their dues: tribute to whom tribute is due; custom to whom custom; fear to whom fear; honour to whom honour. 8 Owe no man any thing, but to love one another: for he that loveth another hath fulfilled the law. We hear the honour to whom honour is due part of the scripture. The minister will often speak of giving honor to mothers and how it is Biblical to do so. Based on that scripture alone, it is biblical to honor mothers. The Bible plainly instructs us to honour our mother and father, but I’m pretty sure that wasn’t suggesting just on a specific day each year. Mother’s Day and Father’s Day is a man made tradition that had nothing to do with the honour spoken of in the Bible. I looked up the actual definition of mother and one of the definitions is : maternal tenderness or affection. Based on the fact that this truly is a man made holiday and the definition of mother includes those that have maternal tenderness or affection can we begin to understand that honouring the other women that I spoke of wouldn’t be against the Bible.

Before anyone thinks that I sat somehow hurt or offended at church today, let me clear that up – I wasn’t. If I’m being just completely honest, without holding anything back, I’m not a fan of flowers. Although they look pretty for a moment they have been cut off from their life source and are already dead. It seems awkward to me that someone says I love and appreciate you with something that is dead. It’s a little like a cat bringing you a dead mouse, ummm thanks, I think. Although it is a nice gesture, the gifts typically given from church more than likely go in the trash soon. You’ll just have to trust me when I say I don’t want their gifts and I wasn’t hurt. However, while I wasn’t offended my heart grieved for those that I know get hurt each year on Mother’s Day.

We took time today to simply celebrate my mother because her children love her and no one in our lives will ever take her place. That doesn’t mean that there haven’t been others that have been a mother like figure in my life and why can’t they be celebrated today as well? I heard someone once say “Lord, if you won’t give me children like other women, give me souls”. Can you image how many spiritual children she had? Why can she not be honoured today? Regardless of the church you attend, if you have taught, nurtured, or per the definition had maternal tenderness or affection, today is your day. For those that are in the situations listed at the beginning of my post, you are celebrated today. Do not let anyone make you feel less than you are!