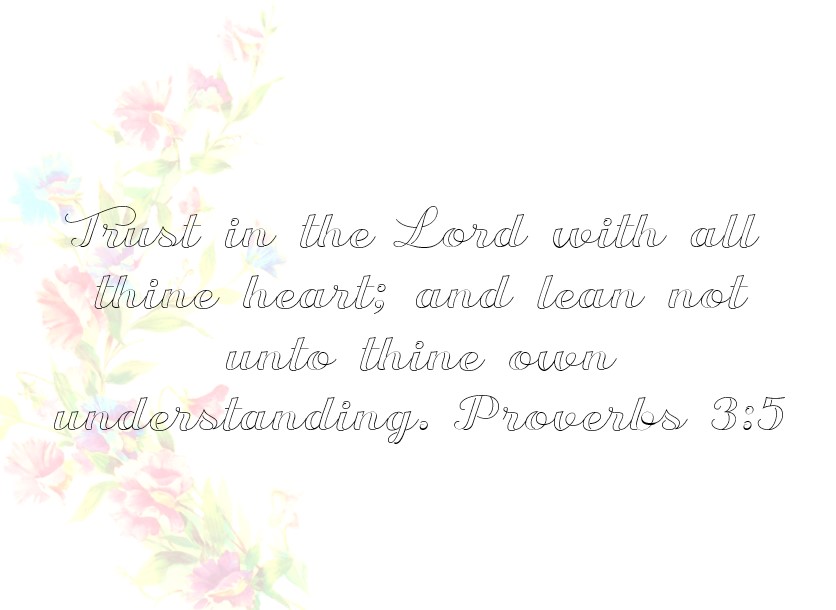 Have you ever been in a team building event and played the trust game? What about just at home with your family? Someone will fall backwards into the arms of the remaining members. I’ve always laughed when they asked me to do such a thing. I don’t care how many people are supposed to be catching me; I am too fat for that nonsense. I don’t care who you are, I don’t trust you that much! My big self isn’t landing on the floor, no thank you! I’ll trust people to do certain things, but catching me isn’t one of them. How often are we that way with God? We’ll trust Him for some things in our life, but to catch us? Some just aren’t so sure He is up for that challenge. Others feel that He doesn’t care about their issues. Regardless of the reasoning people have trouble trusting God. This isn’t new either. If you’ll grab your Bible and look up Luke 8:22-25 and Mark 4:35-40 you see the disciples had the same issue.

Although Jesus was fully God when He came to earth He was also fully man. As a man He had physical needs just as we do. At this point He had been preaching, teaching, basically going non-stop and His body was in need of rest. As they head out on the water I can imagine that since many of the disciples were fisherman by trade they were confident in their skills to make it to the other side. They never thought they would need assistance from anyone. Weary in body Jesus was taking a nap on the boat. While He was asleep then I want to assure you that He no longer has a earthly body and He is never asleep now. Even in His sleep though He was still God and in control. You may ask how He could be sleeping when there was such a storm raging around them. He knew what He had come to earth for. He came to die on the cross and He knew that His work was not finished. He slept because He knew everything would be fine. As long as He was in the boat, that boat wasn’t going to sink. It was going to hit some hard waters. It was going to get some water in the boat even. Those waves were rough and yet it was nothing to Him. If only the disciples had been as confident as Jesus was. Instead they rushed to wake Him and then basically accused Him of not caring. I wonder if sometimes we think we can handle whatever situation comes our way. Then when the storms rise, we begin to get annoyed that Jesus isn’t doing what we want. We look around and see all that is happening and wonder where exactly is He? Why isn’t He fixing my problem. Funny how when we start out we think we can do it all without His help.

Is Christ in your boat today? If so, it will not sink. Storms will come, trials will come, but sinking isn’t an option for Him. Life will come at you pretty hard, The circumstances in your life may seem like they will overtake you, but with God in your boat things will be fine. I don’t mean that things will be exactly as you have envisioned them to be nor do I mean that life is only going to bring things that make you happy. In the end though, I serve a God that will work things for my good. Even the bad situations have good things come out of them.

In this week’s packet you’ll see suggested songs to either find online and listen to or simply sing during your time with God. You’ll also find a scripture page of Proverbs 3:5. Finally you’ll find some questions for you to ponder this week. Let me know what else you’d like to see included in the packet in the coming weeks. Download this weeks packet here.