What You Date Is What You Marry 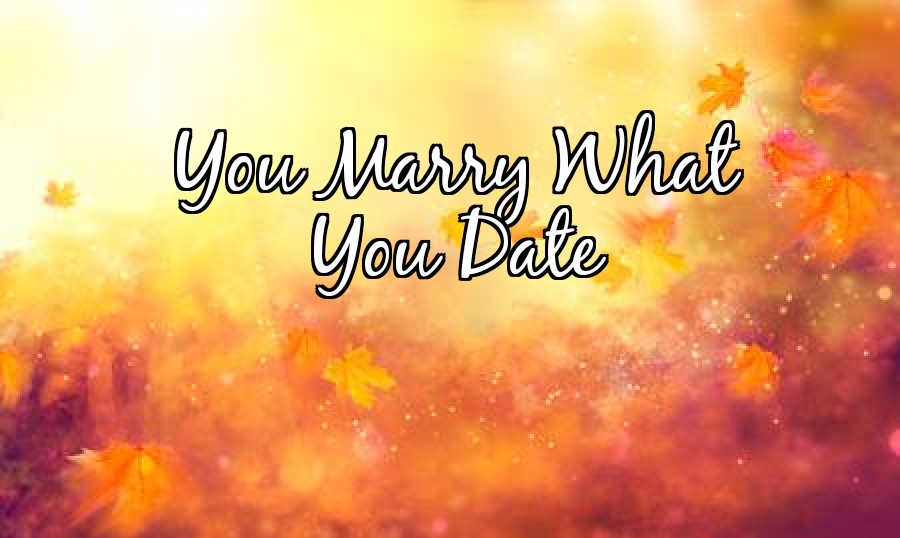 While having dinner with some girls from church we were discussing a trend that for the life of me I don’t understand. One of the young ladies said she has been in this situation herself and at the time she saw nothing wrong with it. She was speaking of a past relationship with a boyfriend in which he seemed to depend on her for most things. It wasn’t a mutually gratifying relationship, she was the mother, girlfriend, protector, and provider for this man child she was seeing. This post isn’t about whether or not you should date, but simply if you’re going to date, pay attention to the type of person you are dating. During the conversation she said something along the lines of in the feminist world we live she felt empowered to be taking on such a role in the relationship. She would often be nothing more than a taxi for him. At the time, she saw herself as a doting girlfriend who was simply being there for the man she loved. She said she knows many others that are in the same situation and again they feel empowered. Don’t get me wrong, I’ve done lots of things for the guys I liked including driving them places if they needed a ride. What I didn’t do was be their taxi. I didn’t take them everywhere because they were too cheap or lazy to fix their own vehicle. I didn’t pay for dinner on a regular because they wouldn’t get a job. I didn’t have to be quiet or go away so they could study to be called back when they read something they wanted to share only to be shooed away when they were done, repeatedly. I wasn’t abused, not even “just” a small bruise. If it’s small now, guarantee it will be bigger later. No amount of I’m sorrys will stop that. Nor was I controlled by another person.

If you know me at all, you know I’m all about Biblical submission. You know that I believe when you are married you are to be submissive to your husband, even if you feel he is being a jerk or believe he is wrong. Disobedience to the Word on his part does not allow disobedience on your part. These girls though aren’t married, they aren’t engaged, they’re just dating. Most people will tell you that at a certain age they stop dating just for fun and they start actually looking for someone they can marry. These girls are all at that age. The type of person it seems they want to be with has little to no regard for them and only thinks of himself. Again I just don’t understand! Perhaps I just think too highly of myself. No, nevermind, no, no I don’t! You see I am a child of the one true King. I want someone to love me as Christ loves the church. I want someone that will honor me, respect me, and value me. I do not want someone that thinks I am his mother, protector, provider or punching bag. Understand I am more than willing to work, but I don’t want to work alone. I don’t want to provide for a husband while he sits and I don’t even know what these guys do, play video games perhaps? Just in case anyone is confused, this isn’t just about females. Guys need to pay attention as well. I know a guy currently crying over a female that has lied, cheated, and even stolen from his family. Why are you pinning over her, dude? Is this really what you want to spend the rest of your life with?

I am worthy of the kind of love the Bible speaks of. I am deserving of a husband that believes I am more precious than rubies. Let me repeat that, a husband that believes I, not what I do for him, but me as a person, is more precious to him than rubies. If a guy is only dating you because of what you do for him then he’ll marry you for the same reason. That isn’t love. I’d rather wait or spend my whole life single than be in a relationship where I am not valued. If I allow someone to treat me less than I deserve before marriage you can guarantee that is how I will be treated after marriage.