The Line to Christmas: Ruth Chapter 1 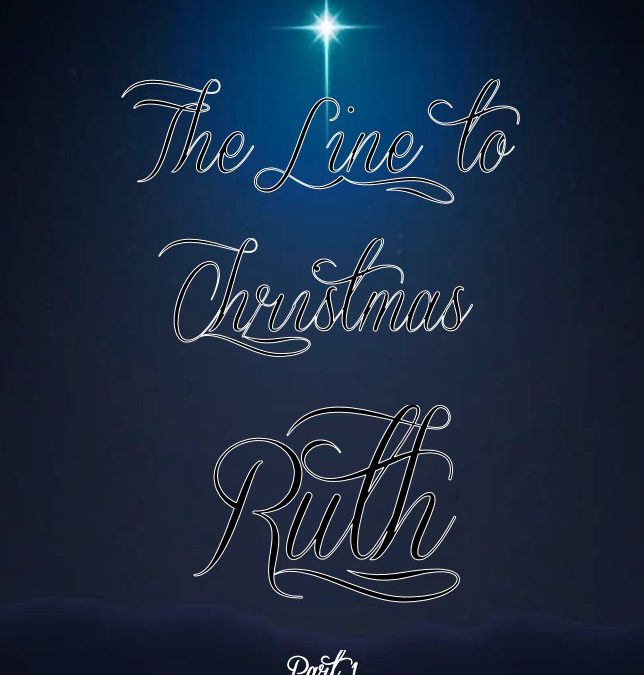 The story of Ruth is one of the most famous accounts of redemption in the Old Testament and with good reason. In it we see the foreshadowing of Christ and His love for us. Without pain and tragedy it is difficult to have redemption and Ruth’s story is no exception. The book of Ruth takes place during the time of the book of Judges. The last verse in the Judges is found in chapter 21 and verse 25. It says: In those days there was no king in Israel: every man did that which was right in his own eyes. In the first verse of Ruth chapter 1 we see that there is a famine in the land. Straight out of the gate we see that this isn’t the best of times and for the family Ruth marries into things are about to get worse. Most know Naomi is Ruth’s mother in law, but few know the other names in Naomi’s family, including Elimelech, her husband. Elimelech takes his wife and two sons and they set up house in Moab. At some point while there Elimelech dies leaving Naomi with two single sons. I have no idea how old the sons were at this point. What I do know is that death is hard, regardless of the age of anyone involved. Naomi lost her husband and Mahlon and Chilion lost their father. In today’s society that’s a hard loss, but in Bible times that’s more than a hard loss. It’s crushing and I don’t just mean emotionally. The father was the provider in ways that we just can’t comprehend  today. It’s easy to look at the book of Ruth and only think of her story, but her story is woven with Naomi’s and Naomi’s redemption as well.

At some point Naomi’s two sons married. One married Orpah and the other Ruth and they lived in the land of Moab for about ten years. Then tragedy strikes again and Naomi loses both her sons. Now the sons are married so instead of Naomi being the lone widow in this story there are three. Hearing that God has visited His people she plans to return home and her daughter in laws start to go with her. She encourages them to go home to their mother’s house though and not go with her. She doesn’t do this because she doesn’t love them, but because she does love them and believes this is what is best for them. Orpah finally leaves, but Ruth stays. Again, Naomi tries to convince Ruth to leave, but Ruth will have none of that. One of the most well now verses from the book of Ruth is in the first chapter and verses 16-17 where Ruth tells Naomi: 16 And Ruth said, Intreat me not to leave thee, or to return from following after thee: for whither thou goest, I will go; and where thou lodgest, I will lodge: thy people shall be my people, and thy God my God: 17 where thou diest, will I die, and there will I be buried: the Lord do so to me, and more also, if ought but death part thee and me.  Ruth isn’t part of God’s people, yet do you see what she says? She declares ‘Thy God my God’! What she must have encountered in those years she was married to Naomi’s son that she refused to leave. That she was willing to leave her country and her people to go with Naomi and turn to the one living true God.

They finally make it to Bethlehem and of course people are asking is this Naomi and we begin to see just how broken Naomi feels. In verse 20 she tells them not to call her Naomi, instead call me Mara: for the Almighty hath dealt very bitterly with me.  She goes on to say I went out full, and the Lord hath brought me home again empty: why then call ye me Naomi, seeing the Lord hath testified against me, and the Almighty hath afflicted me? Can you hear the pain in her words? We typically focus so much of our attention on Ruth and Boaz that we almost forget there are other people in this story. We cast them off as unimportant, but Christ came for us all. In this story we see even before the cross He had a people. We see that Orpah had a choice to go with Naomi and Ruth or go home, Yes, Naomi tried to have them both stay behind, but she couldn’t force them too. In the end Orpah stayed behind and Ruth moved forward to be with God’s people. Our choices aren’t always easy, but we always have one.

Come back next week when we meet Boaz. Below are some questions if you’d like to go through them as you study this week.

The Line To Christmas – Ruth Chapter 1